Last year, the cloud market gave us great pleasure with a lot of thrilling news. Lots of new data centers and innovative services show that the topic has been established in the market. The hunger games are finally over. Although, the German market has developed quite slow as compared to international standard. However, an adoption rate of almost 75 percent shows a positive trend – underwritten by two credible reasons. The providers are finally addressing the needs and requirements of their potential customers. At the same time more and more users jump on the cloud bandwagon.

Cloud providers at a glance

In 2015, cloud providers will enjoy a large clientele in Germany. For that, the majority of the providers have strategically positioned themselves with a German data center to empower local customers to physically store their data and to fulfill the requirements of the German Federal Data Protection Act (BDSG).

Even if the market and the providers made a good progress, Crisp Research has identified following challenges that still need to be addressed (excerpt):

Depending on the provider’s portfolio the requirements above are fulfilled partly or predominantly. However, what all providers have in common is how to address their target groups. Historically, direct dealings in Germany are difficult within the IT market. New potential customers are mainly addressed with the aid of partners or distributors.

View of the users

More than 74 percent of German companies are planning, implementing and using cloud services and technologies in their production environments. This is a strong signal that cloud computing has finally arrived in Germany. For 19 percent of German IT decision makers cloud computing is an integral part of their agenda and operations. Another 56 percent of the companies are planning and implementing or using cloud as part of first projects or workloads. Here, hybrid and multi cloud infrastructures play a central role to ensure integration on data, application and process level. 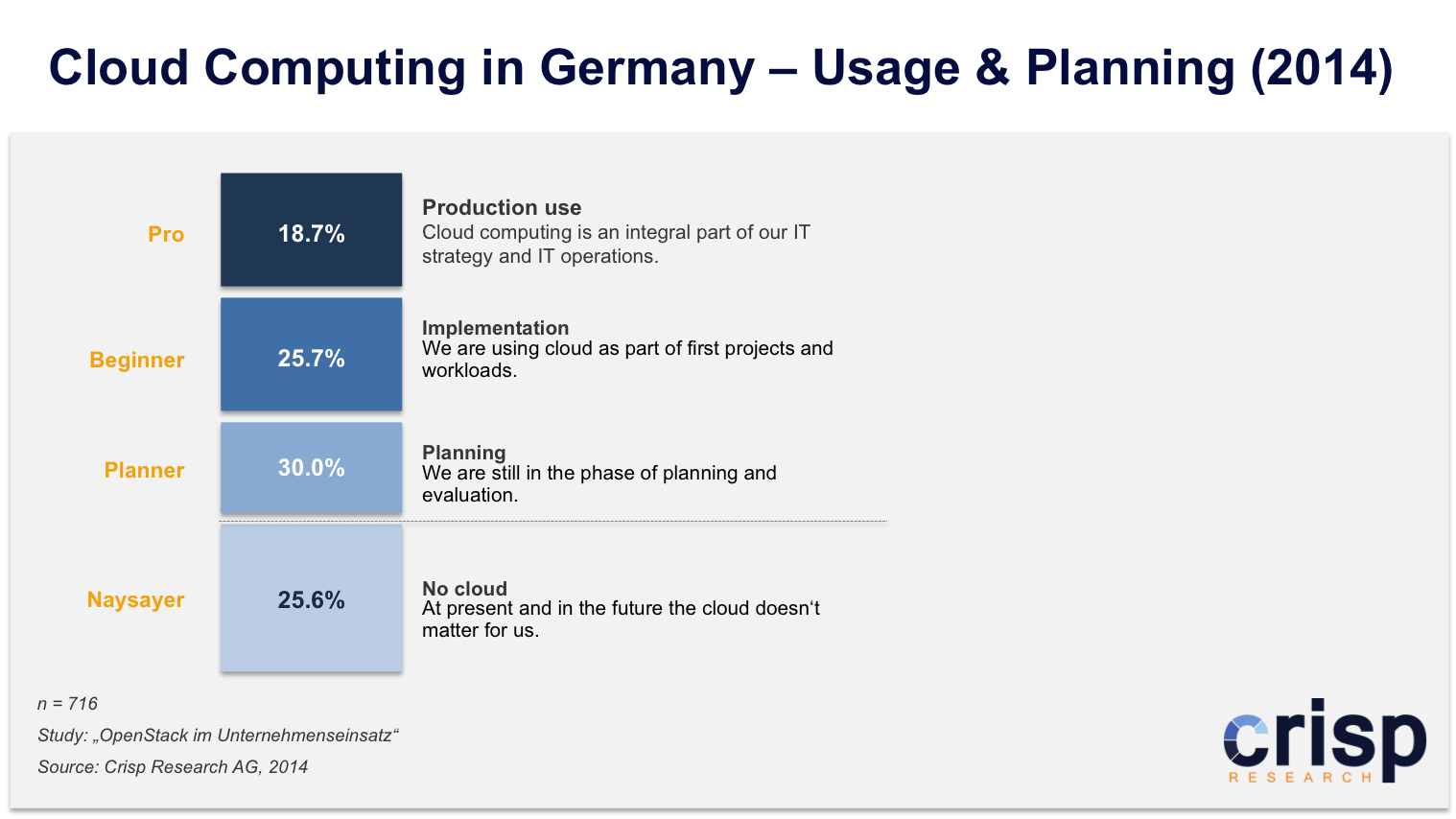 This leads to the question why now – after more than 10 years? After all, Amazon AWS started in 2006 and Salesforce was already founded in 1999. One reason is the fundamentally slow adoption of new technologies – this arises from caution and German efficiency. The majority of German companies are usually waiting until new technologies have been settled and prove the successful usage. Traditionally, early adopters are very few in Germany.

But this is not the main reason. The cloud market had to develop. When Salesforce and later Amazon AWS entered the market not many services were available that fulfilled the requirements or were an equal substitute for existing on premise solutions. For this reason IT decision makers still set on well-tried solutions at that time. In addition, there was no need to change something, which was down to the fact that the benefits of the cloud weren’t clear respectively the providers didn’t clarify it good enough. Another reason is the fact that sustainable changes in the IT industry are happening in decades and not in a couple of years or months. For all those IT decision makers, which set on classical IT solutions during the first two cloud phases, the amortization period and IT lifecycles are ending now. The ones, who have to renew hard- and software solutions today, have cloud services on their list for the IT environments.

German companies are halfway through their cloud transformation process. Meanwhile they are looking to multi cloud environments based on infrastructure, platforms and services from various providers. This part of the Digital Infrastructure Fabric (DIF) is the foundation of their individual digital strategy, on which new business models and digital products e.g. for the Internet of Things can be operated.