Until now, SAP didn’t make a strong impression in the cloud. The Business-by-Design disaster or the regular changes in the cloud unit’s leadership are only two examples that reveal the desolate situation of the German flagship corporation from Walldorf in this market segment. At the same time, the powerful user group DSAG attempts a riot. The complexity of SAP’s cloud ERP as well as the lack of HANA business cases are some of the issues. The lack of transparency of prices and licenses as well as a sinking appreciation for the maintenance agreements, since the support doesn’t justify the value of the supporting fees, are leading to uncertainty and irritation on the customer side. To add to this, a historically grown and complex IT infrastructure causes a significant efficiency bottleneck in the operations. However, a promising internal cloud project might set the course for the future if it is thoroughly implemented: Monsoon.

In the course of the years, the internal SAP cloud landscape has evolved into massive but very heterogeneous infrastructure boasting an army of physical and virtual machines, petabytes of RAM and petabytes of cloud storage. New functional requirements, changes in technology as well as a number of M&As have resulted in various technology silos, thus greatly complicating any migration efforts. The new highly diverse technology approaches and a mix of VMware vSphere and XEN/KVM distributed over several datacenters worldwide lead to increasingly high complexity during the SAP’s infrastructure operations and maintenance.

The application lifecycle management is the icing on the cake as the installations; respectively, the upgrades are manual, semi-automated or automated, as determined by the age of the respective cloud. This unstructured environment is by far not an SAP-specific problem, but represents rather the reality in middle to big size cloud infrastructure whose growth has not been controlled over the last years.

„Monsoon“ in focus – a standardized and automated cloud infrastructure stack

Even if SAP is in good company with the challenge, this situation leads to vast disadvantages at the infrastructure, application, development and maintenance layers:

SAP addresses these challenges proactively with its project “Monsoon”. Under the command of Jens Fuchs, VP Cloud Platform Services Cloud Infrastructure and Delivery, the various heterogeneous cloud environments are intended to become a single homogeneous cloud infrastructure, which should be extended to all SAP datacenters worldwide. Harmonized cloud architecture, widely supported uniform IaaS management, as well as an automated end-to-end application lifecycle management form the foundation of the “One Cloud”.

As a start, SAP will improve the situation of its in-house developers. The foundation of a more efficient development process is laid out upon standardized infrastructure, streamlining future customer application deployments. For this purpose, “Monsoon” is implemented in DevOps mode so that development and operations of “Monsoon” is split into two teams who work hand in hand to reach a common goal. Developers are getting access to required standardized and on-demand IT resources (virtual machines, developer tools, services) through a self-service portal. Furthermore, this mode enables the introduction of the so called continuous delivery. This means that parts of “Monsoon” have already been implemented and used actively in production while other parts are still in development. After passing through development and testing, components are being directly transferred into the production environment without wait time for a separate release cycle. As a result, innovation growth is fostered.

Open Source and OpenStack are the imperatives

The open source automation solution Chef is the cornerstone of “Monsoon’s” self-service portal, enabling SAP’s developers to deploy and automatically configure the needed infrastructure resources themselves. This also applies to self-developed applications. In general, the “Monsoon” project makes intensive use of open source technologies. In addition to the hypervisors XEN and KVM, other solutions like the container virtualization technology Docker or the platform-as-a-service (PaaS) Cloud Foundry are being utilized.

The anchor of this software-defined infrastructure is OpenStack. The open source project that can be used to build complex and massive scalable cloud computing infrastructure supports IT architects during the orchestration and the management of their cloud environments. Meanwhile, a powerful conglomerate of vendors stand behind the open source solution, trying to position OpenStack and their own services built on OpenStack prominently in the market. Another wave of influence emerges through a range of developers and other interested parties who provide their contributions to the project. At present, around 19,000 individuals from 144 countries participate in OpenStack, signifying that the open source project is also an interest group and a community. The broad support can be verified by a range of service providers and independent software vendors who have developed their services and solutions compatible to the OpenStack APIs. Since its development, OpenStack has continuously evolved into an industry standard and is destined to become the de facto standard for cloud infrastructure.

At the cloud service broker and cloud integration layer, SAP “Monsoon” sets on OpenStack Nova (Compute), Cinder (Block Storage), Neutron (Networking) and Ironic (Bare Metal). OpenStack Ironic facilitates “Monsoon” to deploy physical hosts as easily as virtual machines. Among other things, the cloud service management platform OpenStack is responsible for authentication, metering, as well as billing and orchestration. OpenStack’s infrastructure and automation API helps developers to create their applications for “Monsoon” and deploy them on top. In addition, external APIs like Amazon EC2 can be exploited in order to distribute workloads over several cloud infrastructures (multi cloud).

On the one hand, this open approach gives SAP the ability to build standardized infrastructure, in order to support VMware vSphere alongside OpenStack. On the other hand, it is also possible to execute hybrid deployments for both internal and external customers. The on-demand provisioning for virtual as well as physical hosts completes the hybrid approach. Compared to virtual machines, the higher performance of physical machines shouldn’t be underestimated. HANA will appreciate it.

SAP’s open source focus on OpenStack is nothing new. First announcements have already been made in July 2014 and show the increasing importance of open source technologies to well-established industry giants.

In the meantime, SAP’s OpenStack engagement also got around on the side of the user. In the context of the very first empirical OpenStack study in the DACH market “OpenStack in the Enterprise”, Crisp Research asked 700+ CIOs about their interests, plans and operational status of OpenStack. 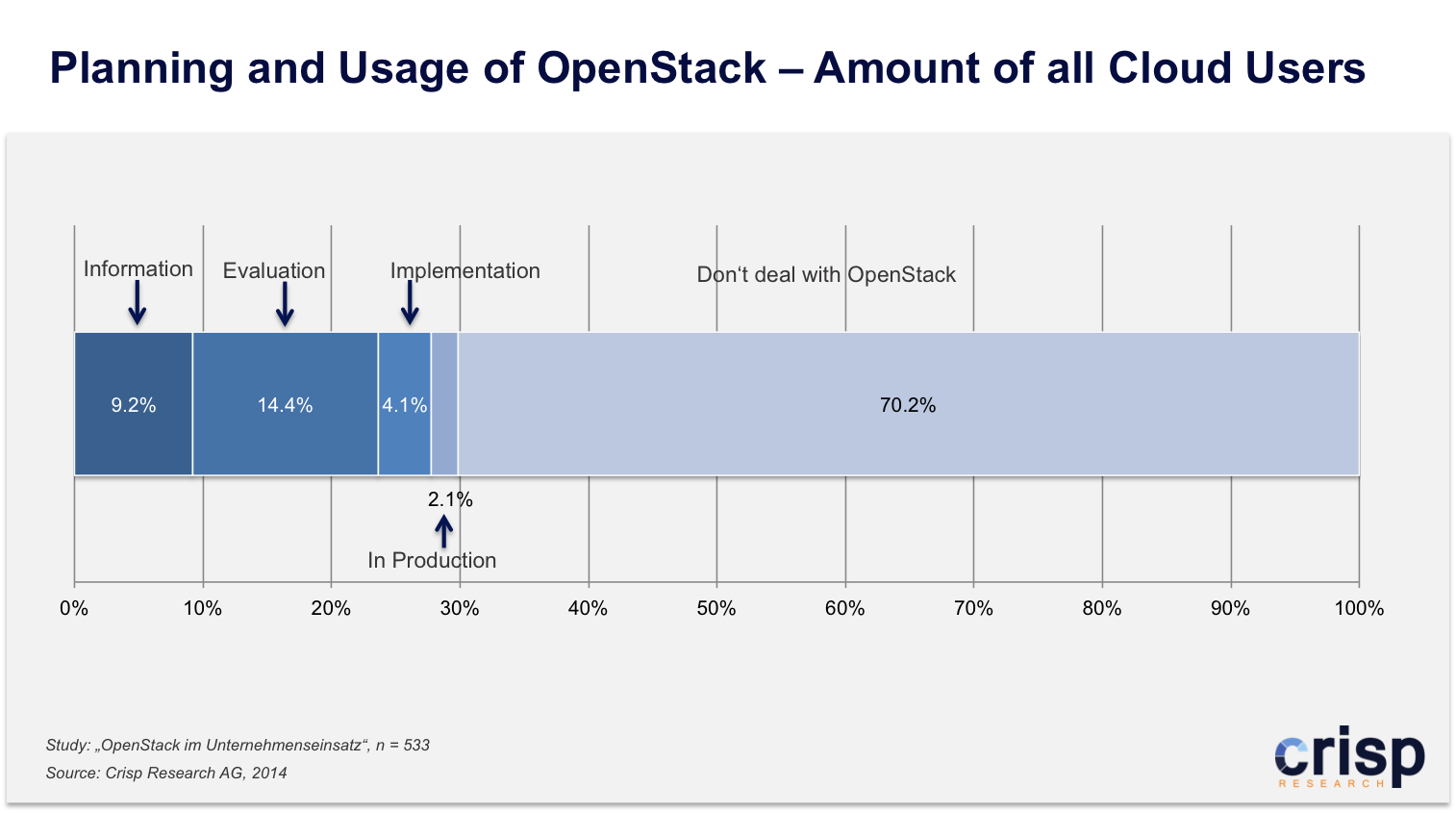 „Monsoon“ – Implications for SAP and the (internal) Customer

In view of the complexity associated with “Monsoon”, the project rather deserves the name “Mammoth”. To move a tank ship like SAP into calm waters is not an easy task. Encouraging standardization within a very dynamic company will raise anticipated barriers. In particular when further acquisitions are pending, the main challenges are to integrate these into the existing infrastructure. However, “Monsoon” seems to be on the right way to building a foundation for stable and consistent cloud infrastructure operations.

As a start, SAP will benefit organizationally from the project. The company from Walldorf promises its developers time savings of up to 80 percent for the deployment of infrastructure resources. As a consequence, virtualized HANA databases can be provided completely automated, thus decreasing the wait time from about one month to one hour.

In addition to the time advantage, “Monsoon” also helps its developers to focus on their core competencies (software development). In former times, developers were involved in further processes such as configuration and provisioning of the needed infrastructure; now they can independently deploy virtual machines, storage or load balancers in a fully automated way. Besides fostering the adoption of a cost-effective and transparent pay-per-use model where used resources are charged by the hour, standardized infrastructure building blocks also support cost optimization. For this purpose, infrastructure resources are combined into standardized building blocks and provided across the SAP’s worldwide datacenters.

The introduced continuous delivery approach by “Monsoon” is well positioned to gain momentum at SAP. The “Monsoon” cloud platform is regularly extended during operations and SAP is saying good-bye to fixed release cycles.

External customers will benefit from “Monsoon” in the mid-term, as SAP is using collected experiences from the project during the work with its customers and will also flow them into future product deployment (e.g. continuous delivery).

SAP is burning too many executives in the cloud

SAP will not fail with the technical implementation of “Monsoon”. The company is employing too many high-qualified employees who are equipped with the necessary knowledge. However, the ERP giant is incessantly showing signs of weakness on the organizational level. This vehemently raises the question why ambitious employees are never allowed to implement their visions to the end. SAP has burned several of its cloud senior managers (Lars Dalgaard is a prime example). For some reason, committed and talented executives who try to promote something within the company seem to have a tough act to follow.

SAP should start to act according to the terms of its customers. This means not only thinking about the shareholders, but also following a long-term vision (greetings from Amazon’s Jeff Bezos). The “Monsoon” project could be a beginning. Therefore, Jens Fuchs and his team are hopefully allowed to implement the ambitious goal – the internal SAP cloud transformation – successfully to the end.