OpenStack has become the most important open source project for cloud infrastructure solutions. Since 2010, hundreds of companies are participating in order to develop an open, standardized and versatile technology framework, which can be used to manage compute, storage and networking resources in public, private and hybrid cloud environments. Even though OpenStack is an open source solution, this does not imply that the setup, operation and maintenance are easy to handle. OpenStack can behave like a true beast. A number of CIOs who are running self-developed OpenStack infrastructure are reporting significant increases in cost and complexity. They have made several fine-tunings to fit OpenStack to their individual needs, developing OpenStack implementations that are no longer compatible with the current releases. This leads to the question whether a build or buy strategy is the right approach in deploying OpenStack in the captive IT environment.

OpenStack has quickly become an essential factor in the cloud infrastructure business. Started in 2010 as a small open source project, the solution is used by hundreds of enterprises and organizations in the meantime including several big companies (PayPal, Wells Fargo, Deutsche Telekom), as well as innovative startups and developers. In the early days its initiators used OpenStack to build partly proprietary cloud environments. More than 850 companies are now supporting the project, among them IBM, Oracle, Red Hat, Cisco, Dell, Canonical, HP and Ericsson. 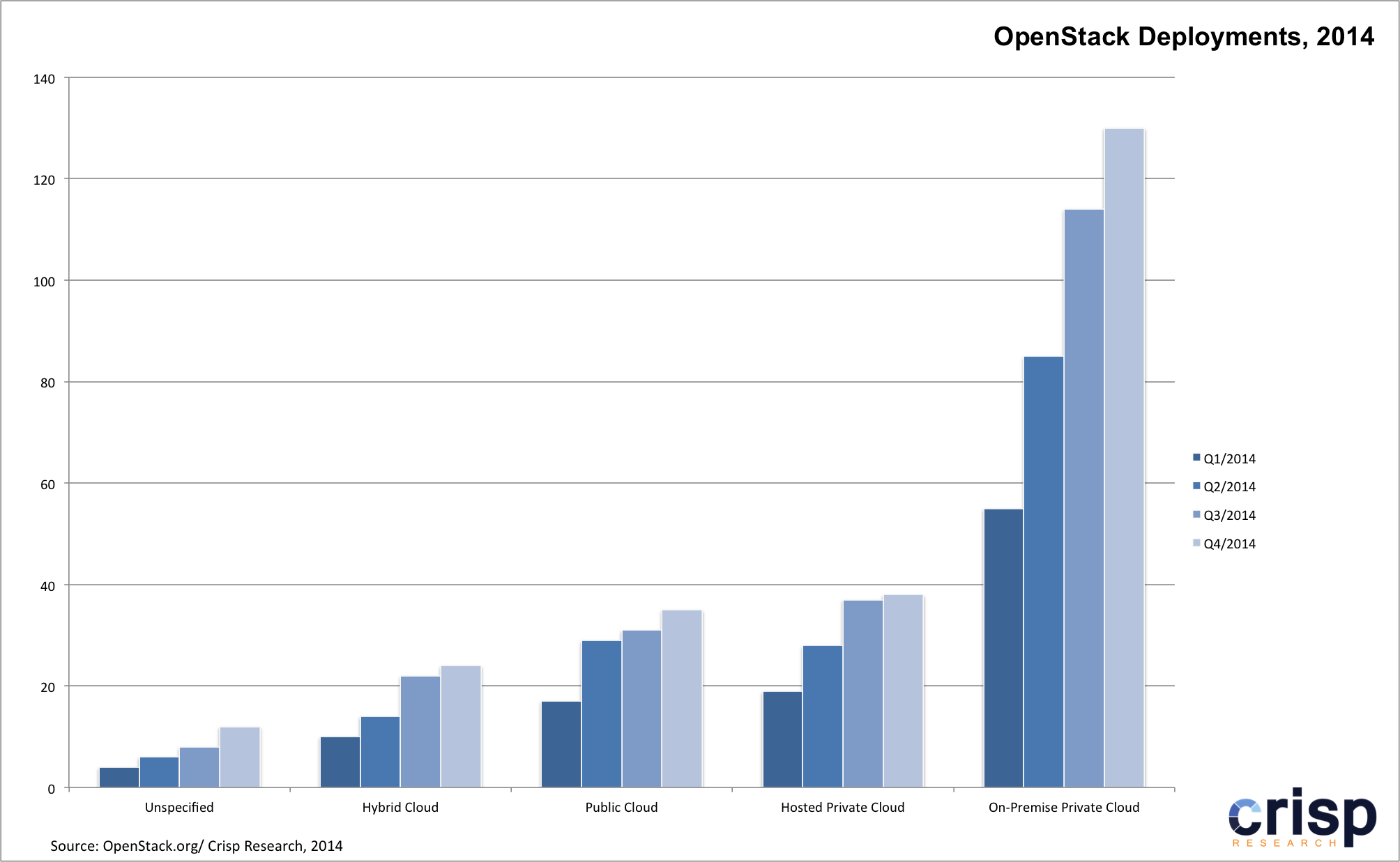 Note: The numbers are based on the official statistics of the OpenStack Foundation.

Alongside the continuous improvement of the technology, the adoption rate accordingly increases. This can be seen in the worldwide growth of the OpenStack projects (increase by 128 percent in 2014, Q1 (105) –> Q4 (239)). Here, on-premise private clouds are by far the preferred deployment model. In Q1 2014, the OpenStack Foundation counted 55 private cloud installations worldwide. In Q4, the number grew to 130. For the next 12 months, Crisp Research expects a 25 percent growth for OpenStack based enterprise private clouds.

OpenStack offers capabilities to operate environments in synergy with a variety of other open source technologies and at the same time to be cost-efficient (no or only minor license costs). However, the complexity level in this case increases dramatically. Even if CIOs tend to use OpenStack only as a cloud management layer, there is still a high degree of complexity to manage. Most of the OpenStack beginners are not aware that OpenStack has more than 500 buttons to configure OpenStack clouds the right way.

The core issue for most of the companies who want to benefit from OpenStack is: Build or Buy!

During the preparation and evaluation of the build or buy decision companies should absolutely consider the in-house experiences and technical knowledge with respect to OpenStack. IT decision makers should bring the internal skills into question and clearly define their requirements in order to compare them with the offerings of OpenStack distributors. Analogous to the Linux business, OpenStack distributors offer ready bundled OpenStack versions including support – mostly with integration services. This reduces the implementation risk and accelerates the execution of the project.

The CIO is in demand

For quite some time, CIOs and cloud architects are trying to answer the question of how they should build their cloud environments in order to match their companies’ requirements. After the last years had been used for “trial and error” approaches and most of the cloud infrastructures had an exploratory character, it is about time to implement large-volume projects within the production environments.