Since the release of the HP Helion Cloud, HP’s whole cloud computing portfolio is using OpenStack as the foundation for both public and private cloud offerings. Since the first release “Austin”, HP has been an active OpenStack contributor. The company committed 13 percent of the code to “Austin“ and throttled it down for “Bexar” and “Cactus”. With “Diablo,” the momentum got bigger but was still under 4 percent. 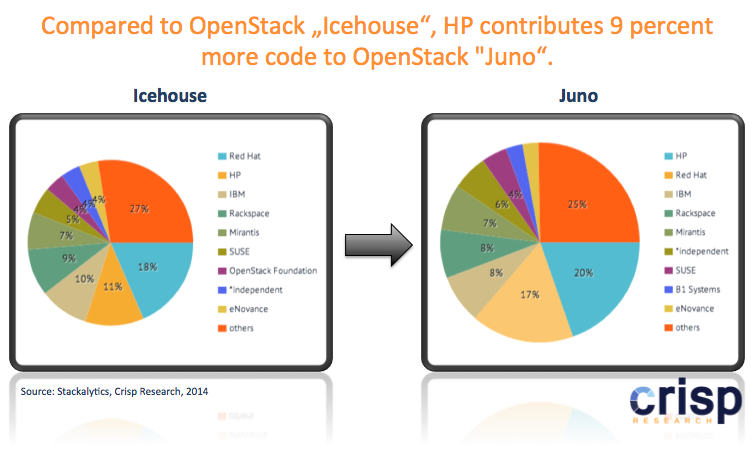 “Essex” could be seen as a turnaround in the strategy to see OpenStack as a more important project. HP contributed 7 percent of the whole code for the Essex release. For the next release “Folsom” (16 percent), the pace was accelerated and for “Grizzly” it increased by one percent to 17 percent.

The contribution decreased for “Havanna” (16 percent) and “Icehouse” (11 percent). But since the development started for OpenStack “Juno”, HP has become the number one contributor. Compared to the current “Icehouse” release, the code contribution already rose by 9 percentage points for “Juno” (20 percent), which will be released in October 2014.

Driving force for a good reason

With respect to the overall OpenStack contribution, HP has so far delivered 13 percent of the OpenStack code. This makes HP the third largest code contributor after Rackspace (18 percent) and Red Hat (16 percent).

HP has a good reason to become the driving force behind OpenStack. Since the whole cloud computing portfolio completely depends on OpenStack, HP must increase its OpenStack influence. This can be accomplished through acquiring a seat in the OpenStack Foundation (HP is already a Platinum Member) as well as through development of own code and ideas. HP already has an advantage stemming from its substantial experience in infrastructure management and software.

HP is a part of the project since the first OpenStack release. The HP Cloud (former Helion Cloud) is also based on OpenStack. But the numbers clearly speak for themselves. HP finally recognized OpenStack as an important strategic investment and is doing well by raising the investments in OpenStack. For the next 12 months, Crisp Research expects a 25 percent growth for OpenStack-based enterprise private clouds. Here, HP can surely play a leading role.

– –
* The numbers are based on official statistics from the OpenStack Foundation.