Several projects launched in the recent past have significantly influenced the cloud computing market, especially when it comes to the development, setup and operations of cloud infrastructure, platforms and applications. What are the hottest and most important open source technologies in the cloud computing market today? Crisp Research has examined and classified the “Top 15 Open Source Cloud Computing Technologies 2014” in order of significance. 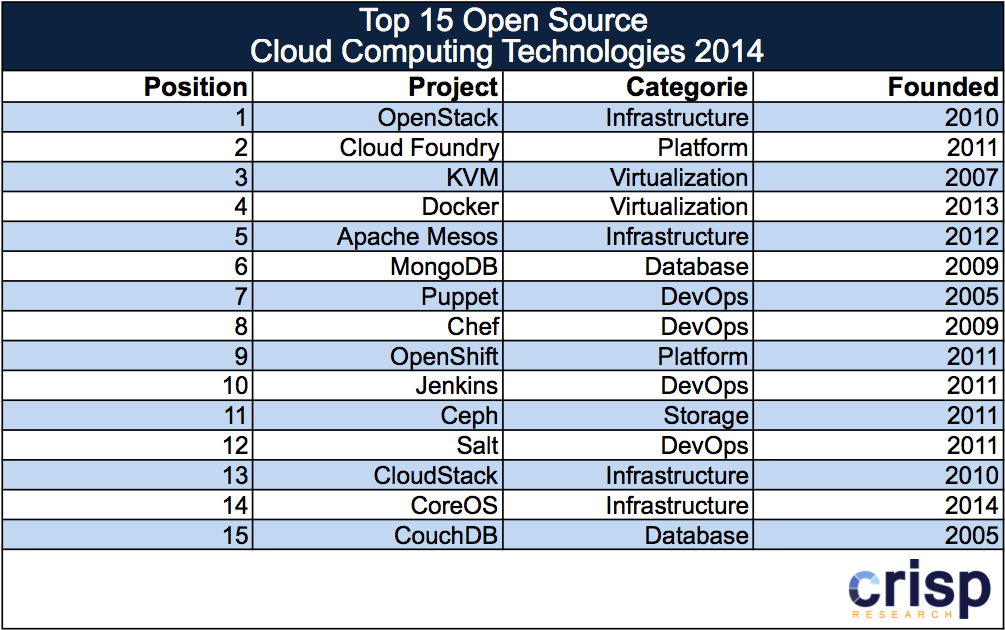 Openness and flexibility are among the top five reasons for CIOs during their selection of open source cloud computing technologies. At the same time, standardization becomes increasingly important and serves as one of the biggest drivers for the deployment of open source cloud technologies. It is for a reason that OpenStack qualifies as the upcoming de-facto standard for cloud infrastructure software. Crisp Research advises to build modern and sustainable cloud environments based on the principles of openness, reliability and efficiency. Especially in the areas of openness and efficiency, open source makes a significant contribution. With this in mind, CIOs set the stage for the implementation of multi-cloud and hybrid cloud/infrastructure scenarios and assist the IT department in the introduction and enforcement of a holistic DevOps strategy. DevOps, in particular, plays a crucial role in the adaptation of Platform-as-a-Service and the development of applications for the cloud and leads to significant speed advantages, which also affect the competitive strength of the business.

The criteria for assessing the top 15 open source cloud computing technologies include:

In consulting projects Crisp Research especially identifies leading users who are using modern open source technologies to run their own IT environments efficiently and future oriented in different scenarios.

Generally, proprietary players such as IBM, HP and VMware schmooze with open source technologies. HP’s first cloud offering “HP Cloud” already based on OpenStack. With HP Helion Cloud, the whole cloud portfolio (public, private) was harmonized via OpenStack. In addition, HP has become the biggest code contributor for the upcoming OpenStack “Juno”-release, which will be released in October. IBM contributes to OpenStack and uses Cloud Foundry as the foundation for its PaaS “Bluemix”. At VMworld in San Francisco, VMware announced a tighter cooperation with OpenStack as well as with Docker. In this context, VMware will present its own OpenStack distribution (VMware Integrated OpenStack (VIO)) in Q1/2015, which empowers the setup of an OpenStack implementation based on VMware vSphere. The Docker partnership shall ensure that the Docker engine runs on VMware Fusion and servers with VMware vSphere and vCloud Air.

Open source solutions like OpenStack are attractive not only for technical reasons. From a financial perspective, OpenStack also supplies an essential contribution, as the open source framework reduces the cost for building and operating a cloud infrastructure significantly. The license costs for current cloud management and virtualization solutions are around 30 percent of the overall cloud TCO. This means that numerous start-ups and large, well-respected software vendors like Microsoft and VMware make a good chunk of the business by selling licenses for their solutions. With OpenStack, CIOs gain the opportunity to conduct the provisioning and management of their virtual machines and cloud infrastructure via the use of open source technologies. To support this, free community editions as well as professional enterprise ready distributions including support are available. In both cases options to significantly reduce the license costs for operating cloud infrastructures. OpenStack empowers CIOs with a valuable tool to exercise pressure on Microsoft and VMware.