What do APIs, integration and complexity have in common? All three are inseparable during the growth process of an IT project. Integration projects among two or multiple IT systems often lead to a delay or even the failure of the whole project. Depending on the company size, on-premise environments mostly consist of a relatively manageable number of applications. However, the use of multiple cloud services and the rise of the Internet of Things (IoT) scales to an excess of integration complexity.

The ever-growing use of cloud services and infrastructure across several providers (multi-cloud) makes a central approach necessary to preserve overview. In addition, it is essential to ensure a seamless integration among all cloud resources and the on-premise environment to avoid system and data silos. The variety of cloud services is rising incessantly.

The cloud supports the Internet of Things and its industrial offshoot – the Industrial Internet. Cloud infrastructure and platforms are providing the perfect foundation for IoT services and IoT platforms and will lead to a phenomenal rise of IoT business models. This will end in a market with ongoing new devices, sensors and IoT solutions whose variety and potential cannot be foreseen. However, the demand for integration also increases. After all, only the connection of various IoT services and devices leads to an actual value. At the same time analytics services need access to the collected data from different sources for analyzing and connection purposes.

The access typically happens via the cloud and IoT service APIs. As a consequence the term API economy comes in the spotlight. Integration Platform-as-a-Services (iPaaS) exposed as good candidates to ensure the access, integration, control and management in the cloud and in the Internet of Things.

iPaaS and API Economy: It’s all about the API

Enterprise Application Integration (EAI) was the central anchor in the age of client server communication to ensure business process integration within the whole value chain. The focus is on the tight interaction of a variety of applications that are distributed over several independent operated platforms. The goal: the uniform and integrated mapping of all business processes in IT applications and thus to avoid data silos.

However, the transition into the cloud age leads to a change in the usage behavior of on-premise interfaces to a mainly consumption of web APIs (Application Programming Interfaces). Finally almost each cloud and web services provider offers a REST or SOAP based API that enables to integrate services in the own application and thus benefit directly from external functions. Along with the increasing consumption of cloud services and the ever-growing momentum of the Internet of Things, the importance of APIs will rise significantly.

The cloud native Internet companies are reflecting this trend. APIs are a central competitive factor for players like Salesforce, Twitter, Google, Amazon and Amazon Web Services and represent the lifeline of their success. All mentioned providers have created an own API ecosystem around them, which is used by their customers and partners to develop own offerings.

In this context the term “API economy” is used. The API economy describes the increasing economic potential of APIs. Thanks to mobile, social media and cloud services, APIs are no longer popular only under developers but also find their ways on the memos of CEOs and CIOs who have identified the financial impact. Providers typically benefit from APIs by: 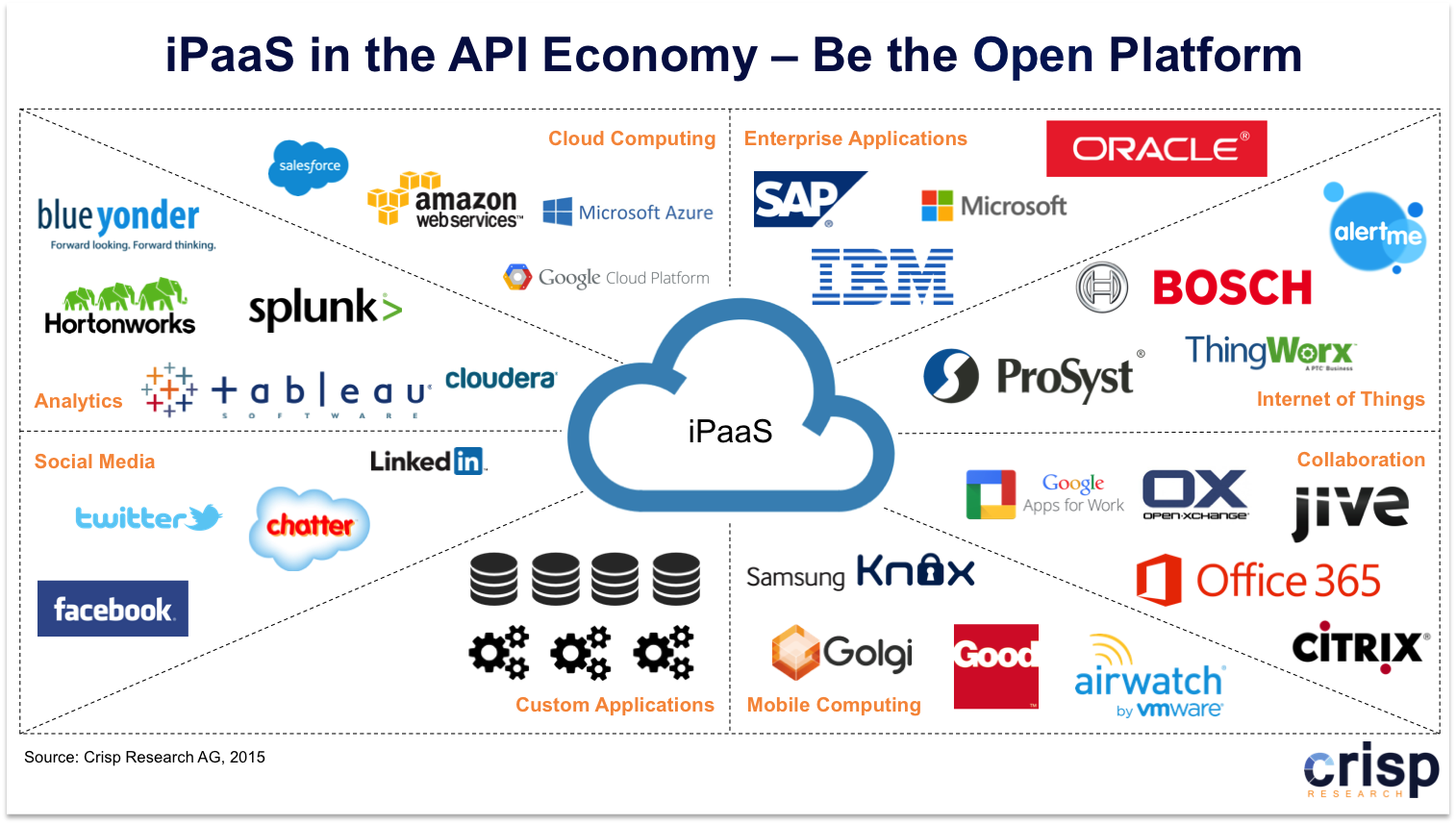 CIOs benefit from the API economy by getting access to a quasi endless choice of applications and services they can use to expand their websites, applications and systems without developing, operating or even maintaining these functionalities on their own. Furthermore, APIs enable partner, customers and communities to get an easy access to own applications, data and systems to let the CIO’s company become a part of the API economy.

Everything works using pretended “simple” API calls. However, the devil is in the details. Integration and API management have a big significance in the API economy.

Over the last years many vendors have been originated that are specialist on the API management and integration of different services. These, so called, Integration Platform-as-a-Services (iPaaS) are cloud based integration solutions (in pre cloud times known as “middleware”) that support the interaction between several cloud services. Thus, developers and enterprises get the opportunity to create own “integration flows” that connect multiple cloud services among each other but also on-premise applications.

The iPaaS market splits in two camps: The wild startups and the IT majors who have developed respectively rebuild their portfolios. iPaaS vendors to watch are (excerpt):

IoT and Multi-Cloud: The future belongs to open platforms

Openness is a highly discussed topic in the IT and especially in the Internet. The past or rather Google have taught us: The future only belongs to open platforms. This is not about openness that should be discussed in terms of open standards – even or especially Google runs diverse proprietary implementations, e.g. Google App Engine.

However, Google understood from the very beginning to position itself as an open platform. Important: Openness in the context of providing access to its own services via APIs. Jeff Jarvis illustrates in his book „What Would Google Do?“ how Google – based on its platform – enables other companies to build own business models and mashups. Not without a cause – of course. This kind of openness and the right use of the API economy quickly lead to dissemination and made Google to a cash cow – via advertising.

Companies like Unify are still far away from the status to become comparable with the Google platform. However, the decision makers at Unify apparently realized that only an open architecture approach helps to turn the company from a provider of integrated communication solutions to a cloud integration provider and thus to become a part of the API economy. For this purpose Unify Circuit doesn’t only consolidates external cloud services on its collaboration platform, but rather enables developers to integrate Circuit’s core functions like voice or video as mashups in their own web applications.

From a CIO perspective integration is crucial to avoid system and data silos. A non-holistic integration of multiple and independent systems can harm the overall process. Therefore it is vital that cloud, IoT and Industrial Internet services are seamlessly integrated among each other and with existing systems to completely support all business processes.