The hard numbers speak for themselves. Those who still assume that the cloud is just a playground for developers, must learn a lesson from the $1.8bn revenue ($391m net profit) of Amazon Web Services. Such numbers cannot be accomplished with a couple of small workloads but are rather a clear indication of increased relevance for corporate customers. The strengths that AWS has proven on the international stage continuously increase in Germany and have a positive impact on the German cloud market.

„First they ignore you, then they laugh at you, then they fight you, then you win.“ The evergreen quote from Mahatma Gandhi is also relevant to the cloud story. In the beginning, the cloud was laughingly labeled as „the hype“; then followed the battle with partially erroneous arguments, among which the ever-recurring topics of Data Protection & Data Security, well covered by the media and unfairly used interchangeably. At the end of 2014, however, the cloud in Germany had rapidly spread out and this shift continues in 2015.

An analogy to the cloud’s growth can be made with the triumphant spread of WLAN at the enterprise and can provide evidence as to why the cloud finally enforces itself. Earlier, CIOs were being ridiculed for daring to introduce WLAN infrastructure and open their businesses to the outside world. Psychology and technological developments have made it possible to dismiss further claims that WLAN is unsecure.

The Cloud is the foundation for Digital Transformation

For close to 75 percent of the German enterprises, cloud computing occupies a significant place on the IT agenda. The cloud is either an active component of the ongoing IT operations and deployed as part of projects and workloads, or being used for planning and implementation purposes. We see a clear trend toward hybrid cloud solutions. More than half of the survey respondents (57 percent) rely on this operational cloud model. Moreover, in the context of multi-cloud strategy, managed private cloud environments (57 percent) gain increasing importance.

The hybrid cloud stays in focus, especially because enterprises are intensely occupied with the topic of „Data Gravity“. This comes down to data immobility. Either the data volume is too large to store in the cloud, or legal frameworks necessitate the keeping of specific data on premise. A hybrid cloud architecture is in a good position to address the challenges of „Data Gravity“ and offer unique solutions. In this case, data mobility is no longer necessary. Instead, the data are kept on private storage systems (for example, in the managed private cloud) and the public cloud services (compute power, applications, etc.) then access the data for processing. In the course of processing via the use of public cloud services, the data have indeed been modified and, as the case may be, new data have been generated. However, the data never leave the storage system in the direction of the public cloud.

Only around 25 percent of the German decision makers do not find any place for the cloud on their IT agenda. It is a matter of wait and see how long this stays the case. The pressure on the different departments for more flexibility and a shorter time-to-market for new applications is increasingly stronger. At the end, it all boils down to the CIOs not being able to move forward without using cloud services, in whatever form they may be. And who would let oneself to be reproached for negligently playing the wrong note with the digital transformation opportunity?

Among those businesses that actively dedicate themselves to the digital transformation, and accordingly build a Digital Infrastructure Fabric (DIF), the cloud platforms and infrastructure are a central part of IT strategy in supporting the digital efforts. This is indicated by the open presence of Infrastructure-as-a-Service and Platform-as-a-Service on the agenda of respectively 63 percent and 70 percent of CIOs, and their use as a foundation for the development and operations of new applications.

Furthermore, the Internet of Things (IoT) will spur forward the German cloud market and quickly become a decisive factor for the future competitive advantage of businesses who must quickly get busy and grapple with the necessary technologies. Public cloud environments – especially infrastructure (IaaS) and platforms (PaaS) – offer the ideal prerequisites for back-end support of IoT services and end devices. The critical attributes for this aim have already been placed in the cradles of leading public cloud providers, to be further developed into an IoT backend. One can then rightfully adhere to the view that cloud growth in Germany and the advancement of the Internet of Things are closely interrelated. 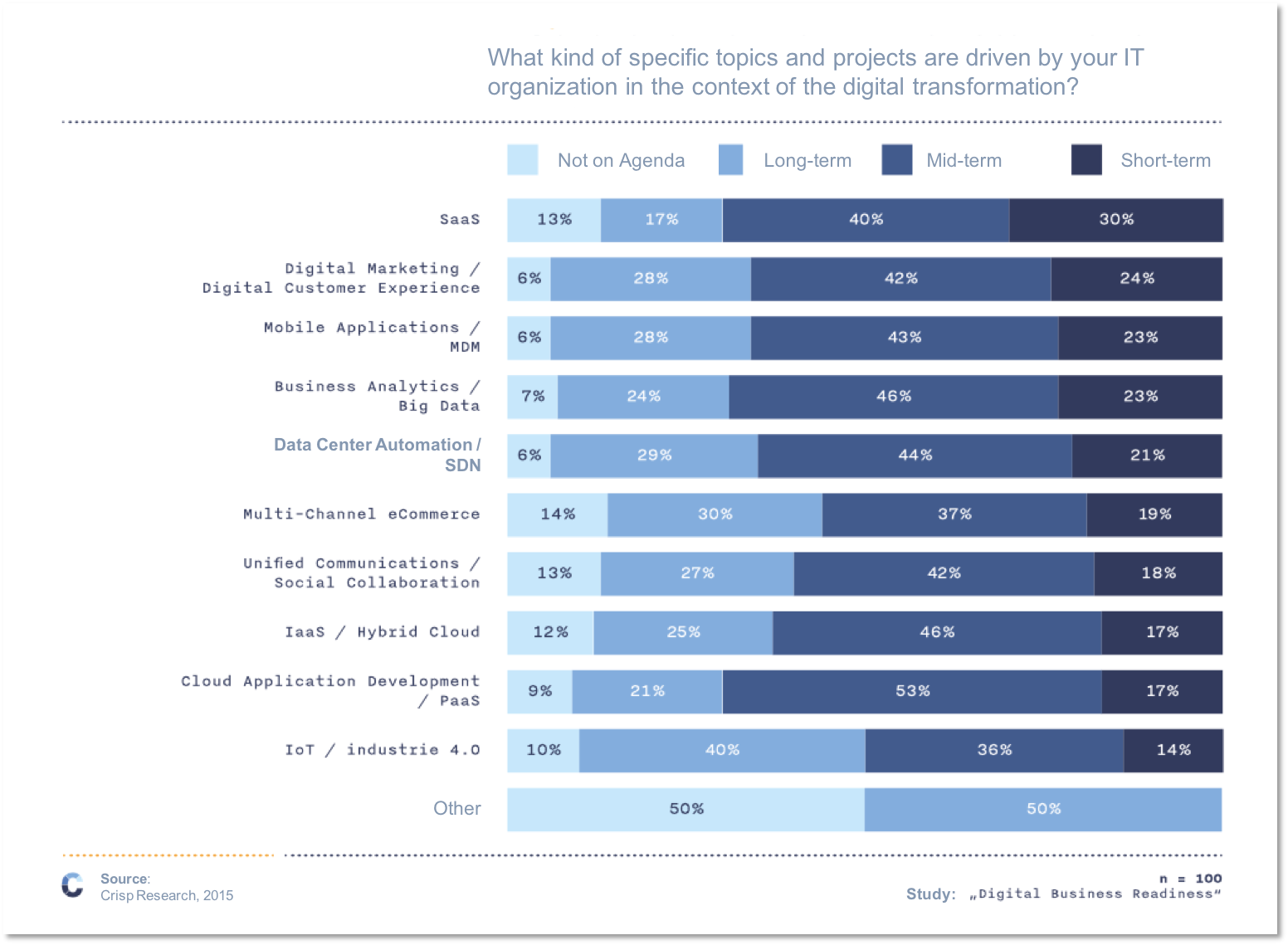 An overview of the behavior of the most important public cloud providers is presented in the current research note: „Public Cloud Providers in Germany: Frankfurt is the Stronghold of Cloud Data Centers“.

In the beginning of the year, Crisp Research outlined ten trends in the cloud computing market in Germany. Six of them are already a reality.

Marketing Gimmick: „Cloud Made in Germany“

Instead of applauding „The German Cloud“, German providers should rather use their strengths to develop and bring to market innovative and appealing cloud services. The market leadership and the clear innovative advantage of the US providers versus the German ones present a grave problem. At the end, the availability and the competitive advantage of the German cloud services is really shrinking. Many enterprises are snatching the offerings of the cloud providers from the US.

The fact is that a large part of German CIOs ask for German data centers, in order to guarantee the level of data protection and fulfil the legal requirements. Certainly, enterprises should not neglect the significance of global scalability, in order to expand to other geographies. Having a provider with a global footprint is imperative. Here is a reason why the IT and cloud strategies must be aligned from the beginning.

The German businesses find themselves in the middle of their cloud transformation processes. They lay out a multi-cloud strategy step by step, based on existing infrastructure, platforms and services from different providers. In the course, CIOs assess technologies and providers for the creation of their Digital Infrastructure Fabric (DIF), which will further play out the technological implementation of the individual digital strategy and will put the foundation of novel business models and agile business processes.

The cloud has acquired leading status as a vehicle for the digital transformation. Only by means of deploying dynamic and globally scalable platforms and infrastructure can the IT strategy adequately address the evolving market conditions and support the business strategy in an agile way from a technical perspective.