Due to continuous relocation of business-critical data, applications and processes to external cloud infrastructures, the IT-operating concepts (public, private, hybrid), as well as network architectures and connectivity strategies are significantly changing for CIO’s. On the one hand, modern technology is required to provide applications in a performance-oriented, stable and secure manner, on the other hand, the location is significantly decisive for optimal “Cloud-Connectivity“.

Against this background, Crisp Research assesses the role of Frankfurt as data center location and connectivity hub with this strategy paper.

The strategy paper can be downloaded free of charge under “The significance of Frankfurt as a location for Cloud Connectivity“. 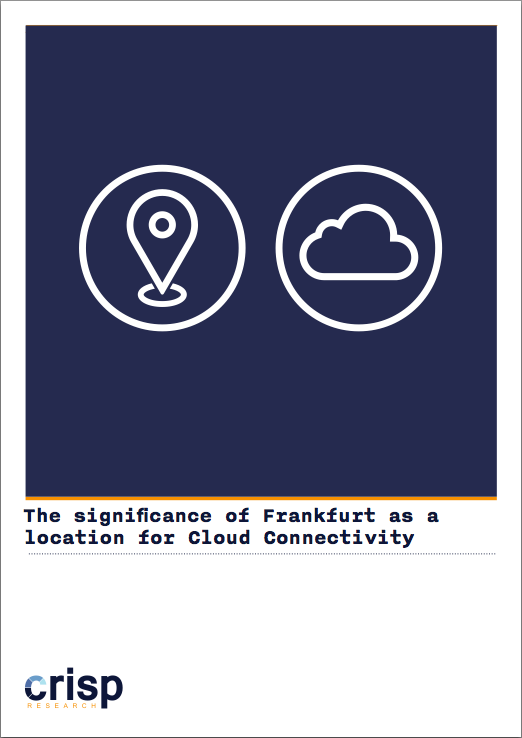 First, I have this information not from a Microsoft employee, so it is not a confirmed report. However, three people have told me, independently from each other, the fact that Microsoft plans to build at least one data center for its cloud services, including Windows Azure and Microsoft Office 365, in Germany. Therefore, one should assume that a little truth is behind this information. If Microsoft would confirm this, you should just say chapeau Microsoft! This is exactly the right way.

It fits into their strategy

Microsoft’s current strategy is “CLOUD First”. This is no secret and was confirmed to me several times by Microsoft’s side. Among others from the business division Dynamics CRM that is constantly growing through the cloud. At Microsoft since the launch of Dynamics CRM Online in 2011 the approach is “cloud first!” and this seems to prove themselves. The cloud solution has reached a high level of customer acceptance, which was able to win 30% more customers for Microsoft Dynamics CRM. While 60% of all new customers rely on the cloud solution.

The situation is similar in many other areas of the company. Be mentioned only Windows Azure, which is constantly being expanded, or Office 365. For this reason, the construction of at least one data center in Germany is and and would be the next logical step to meet us Germans with regard to confidence.

Microsoft supplies the European market currently over its data centers in Ireland (Dublin) and the Netherlands (Amsterdam). This comes with many Germans, especially privacy officers and medium-sized enterprises, to discomfort. Storing data outside of Germany and a contract after a maximum of European law is not welcome. However, Germany should not be neglected as a business location. For U.S. companies Germany may indeed be a small country, but to underestimate the economic power would be fatal.

If the fact is true, that Microsoft is building a cloud data center in Germany, it would be an enormous competitive advantage over other providers such as Amazon Web Services or Google. Especially in the highly competitive market for corporate customers, where Amazon AWS and Google struggle and where Microsoft already has the best starting position, due to an existing broad customer base, Microsoft would make a big step forward.

Beyond – If the data center will be built, as I believe strategically, Amazon and Google will each no longer come around to build their own data center in Germany. Indeed both and in particular Amazon is the technologically leader in the cloud computing market, but the location advantage is not negligible with a data center in Germany to actively begin to take the concerns of the German companies.

After all, cloud computing is the future! Only the legal and data privacy issues need to be adapted to the level of countries plus the customer needs which must be considered. Technologies and services are allowed to and even have to be standardized! But contracts and organizational issues have to be lead at eye level.